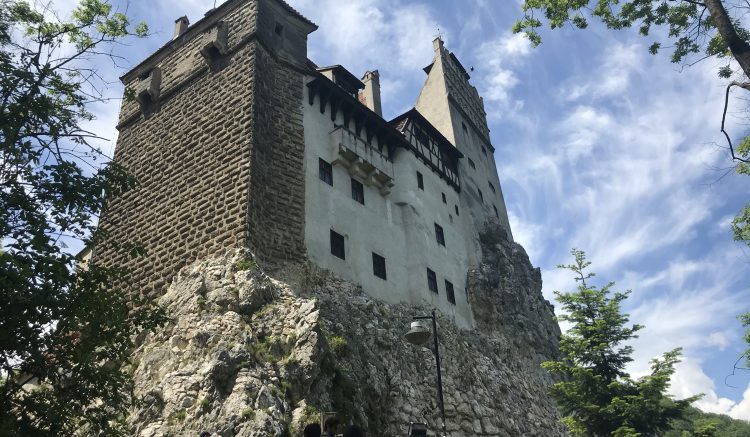 In May 2018, after starting in Bulgaria, I continued east to travel to Romania. My friend Iuliana comes from Bucharest, the capital. I was lucky to stay with her and have her show me around. We met while we were both living in Paris and volunteering for Parkrun Bois de Boulogne around 2016. Together we explored the sights of Bucharest. The architecture is a fascinating mixture of ornate old buildings, solid communist structures and modern buildings.

One day of the trip, she drove us to the countryside. The way to Bran (AKA Dracula’s) Castle was hilly and at times even mountainous. The castle is small but very interesting, and well-decorated inside with some history about the family. Iuliana said that when she visited as a child, the castle was empty. The nearby city of Braşov was quaint and had beautiful architecture in the central square.

This a short guide based on my travel to Romania for 4 days. Next time I visit, I would like to see some of the museums as we ran out of time.

The currency in Romania is the leu (singular) or lei (plural). As of January 2022, one British pound is equivalent to 5.91 lei.

There are many lovely cafes and bars in the Old Town of Bucharest. We stopped at a bar called Bel Mundo and enjoyed drinks at the outdoor tables. Unfortunately, the bar is no longer there but the whole area around Pasajul Vilacrosse is lively and there are plenty of options. The local beers were refreshing and there were many I had never heard of before. I also enjoyed trying the local Romanian wines.

Nearby, we had dinner at a traditional restaurant called Hanu’lui Manuc. The ambience is friendly and fun, and luckily that night we were entertained by live traditional music. We had beef salad and grilled aubergine spread with fresh bread for starter. Then I had the mici (meatballs) and my friend had sheep sausage with potatoes. Very delicious and filling. And the local rose wine was crisp and fresh.

After visiting Bran Castle, we drove to Club Vila Bran on a hill. It is a resort with a traditional restaurant. The area was very peaceful and beautiful to walk around. We even found some deer! We had an amazing view of the surrounding countryside and the castle. At the restaurant, I had the set lunch menu of potato sour soup, chicken with sauce, cheese, rice and pickles and a poppy seed dessert. Iuliana had a polenta ball baked with cheese and sausage, bacon, and fried donuts with fresh cheese and berry sauce. We shared so I could try everything and I loved all of the dishes! There were some unusual flavours for my palate.

A: No but to see the countryside it is probably easiest to travel by car

A: Many people at the restaurants and shops did not speak English so it would be best to have a translation app available.

A: Yes but be careful in the city

Q: How easy is it to send postcards? Postcards are available in Bucharest at shops. It was easy to buy stamps at the post office. I was with a friend who speaks Romanian but I think it would have been possible, especially with a translator app like GoogleTranslate.