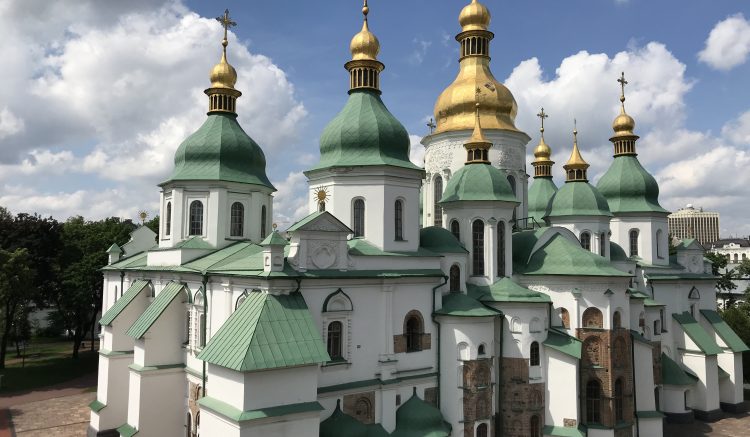 In May 2018, after Bulgaria, Romania and Moldova, my last stop on the trip was the Ukraine. I decided to travel to the Ukraine because it didn’t look too far on the map. In addition, I wanted to visit my friend Averyan who had moved back to his home country from London. It was great to receive such a warm welcome from him and his family. Luckily, he also gave me good advice, loaned me a phone, and took me to cool places to eat.

First, a funny story about what happened to me upon arrival in Kyiv. As I was walking down to the metro on the way from the airport to the city, a guy in front of me found a plastic bag of money. He offered to split it with me, but I insisted he keep it. Then he said he would keep it, but another guy ran up to us. The second guy said he had lost some money, and aggressively asked to search my handbag. Luckily, I didn’t have anything of value. The first guy handed the money bag to the second guy and walked away. Finally, it dawned on me that it was a scam. However, I checked my handbag and nothing was missing. What a way to start the trip!

When I told Averyan, he told me I should not take any public transport as it is dangerous especially for a tourist. He insisted that he would drive me or that I should use Uber for the rest of the trip.

This is a short guide based on my travel to the Ukraine for a few days. Kyiv (or Kiev), the capital, is a beautiful city full of churches! I am glad I went because currently, at the time of writing this post, there is a lot of tension with Russia.

The currency in the Ukraine is the hryvnia. As of February 2022, one British pound is about 38.4 Ukrainian hyrvnia.

Aroma Kava in Podil old town had nice coffee and free wifi. In general the casual restaurants and cafes helpfully had wifi.

I ordered a ham and cheese salad from Salateira to try to eat healthier, but it was all pasta and tomatoes with no lettuce. At least it was tasty!

My friends booked lunch at Vero Vero Italian restaurant in the Old Town. We sat at a peaceful table outside near the fountain. First, we had sparkling fresh lemonade and focaccia for sharing. Then I had an artichoke salad and rabbit ravioli. Delicious and excellent service!

By chance, I found Ostannya Barykada (Last barricade), which was a really cool restaurant with a revolution theme. It’s hidden with lots of artefacts and secret doors and rooms. At one point I sat on a bench at a bar and it moved me into the next room. The table had a good view of the stage where an accordion player arrived to play. I had radish and egg salad, two types of cheese with brown bread, chicken kyiv (have to try that while in Kyiv!) and vegetables. I also tried the Ukrainian sparkling and red wines. See my recipe for Chicken Kyiv here.

The chocolate from the Ukrainian Lviv chocolate shop are highly recommended. They have a different taste to the other chocolates I have tried. Very tasty, creamy and unique.

I had a huge meal at Chachapuri, a Georgian restaurant. They gave me a shot of something strong to start with an appetiser. Then I had a tomato, cucumber, cheese and olive salad. Following that, I enjoyed a lamb dumpling (khinkali), khachapuri with spinach and cheese and a fried meat pie (cheburek) with meat, cheese and tomatoes. I had to take the khachapuri to go because the portions were so large!

My farewell meal with friends was at Under wonder restaurant, which they said is known for their meat. We had two starters, a pate shaped in balls and covered in a fruit jelly, and thinly sliced roast meat. Delicious! I had a salad with lettuce, tomato, celery and apples. Then the servers prepared the Florentine steak with flourish by flaming it in a pan near the table.

A: No, not for Kyiv as it is either walkable or you can take Uber

A: In general, most people did not speak much English so I recommend having a translator app. Also, some signs are only in Cyrillic so can be difficult to read.

A: Maybe but be careful as there are a lot of scams, which I almost fell victim to.

Q: How easy is it to send postcards? You can find postcards at the bookshops and stamps are easy to buy from the post office. The post office only had postcards from another Ukrainian city, not Kyiv! Luckily, my friend’s brother Alexey was very kind and he bought me a beautiful pack of Kyiv postcards. I sent some and kept some as my souvenirs!