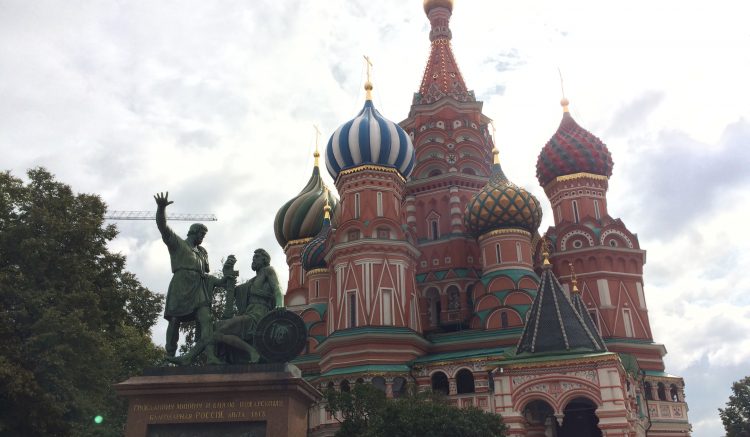 Before I could consider any travel to Russia, I first had to get through the visa application process. When I went to the Russian Embassy, they handed me an iPad. One part of the form requested that I enter all countries that I had visited in the past 10 years. I started to do so and it had been about 45 minutes when the iPad crashed. The lady then instructed me to just “list a few countries” and that would be fine. It was a funny and frustrating start to my travel planning!

Luckily, my friends Fred and Katia were living in Moscow at the time. They were a great source of advice, helping me to figure out the required letter of invitation and plan my trip. I also stayed at their apartment in Moscow and they showed me around. It was a lot of fun and made the trip so enjoyable! Otherwise, I may have found Moscow a bit intimidating. People did not seem very friendly and it is a large city to navigate.

In contrast, Saint Petersburg seemed a lot more tourist-friendly. I was on my own there and it was easy to get around. In fact, I even took the public train to visit a palace outside the city. I do recommend visiting both cities for the contrast in architecture and atmosphere.

This post is a short guide based on my travel to Russia, and a whirlwind visit to Moscow and Saint Petersburg over five days.

The currency is the Russian ruble. As of February 2022, one British pound is equal to more than 103 rubles.

Luckily I was staying with friends in Moscow so I had breakfasts there and also tried some local salted fish!

My first meal out was for lunch at Ugolek, a trendy industrial themed restaurant-bar. The menu had a variety of European food and everything was tasty.

We had a fun dinner underground at Delicatessen. The entrance would be easy to miss. I don’t remember what we ate but I do remember having the Moscow Mule cocktails! Every time you order one you can ring a bell.

Taras Bulba Russian Restaurant was very traditional in its decor and food. I enjoyed trying kvass, bread with fat spread, borscht and cabbage rolls. Kvass is a type of malt drink and borsct is the well-known beet soup. Lots of food!

My first meal in Saint Petersburg was at the Literary Cafe. It is a very classy yet still informal restaurant. I tried that Aubergine caviar and Pelmeni (dumplings) which were delicious. The service was very attentive and smooth.

The fanciest meal of my trip was at Palkin. It is classy and traditional, with excellent food and service. I felt like I was at a Michelin-star restaurant but the prices were very good value. The meal started with an amuse bouche caviar and cream, followed by herring mousse. The palate-cleansing sorbet was served in an impressive cloud of liquid nitrogen. Then, I had a goose pie for the main course, with beautifully decorated pastry. Finally, the impressive dessert was white chocolate and rooibos cream served with pink pepper ice cream. An excellent culinary experience!

Of course I had to try beef stroganoff, which originated in 19th century Russia. The Stroganoff Steakhouse was a great find and the portions were huge!

Next time I visit I will definitely try the Russian Salad. I forgot to try that while in Russia, but now I’ve made it at home from a recipe sent to me by a friend from Moscow.

A: No, not for the big cities like Moscow and Saint Petersburg. However to explore sights outside of the city, a tour guide and transport would be useful.

A: In Moscow, I found that many people did not speak English. Also, most signs are in Cyrillic so I suggest you use a translator app such as GoogleTranslate. In Saint Petersburg, more people spoke English because there were many tourists around.

A: Yes it is possible to travel solo. You should stay alert as there can be some scams that target tourists for thefts.

Q: How easy is it to send postcards? It was easy to find postcards in tourist shops. For the post office, I luckily had my Russian-speaking friends with me. However, I think I could have managed with a translator app. The post boxes are very colourful!