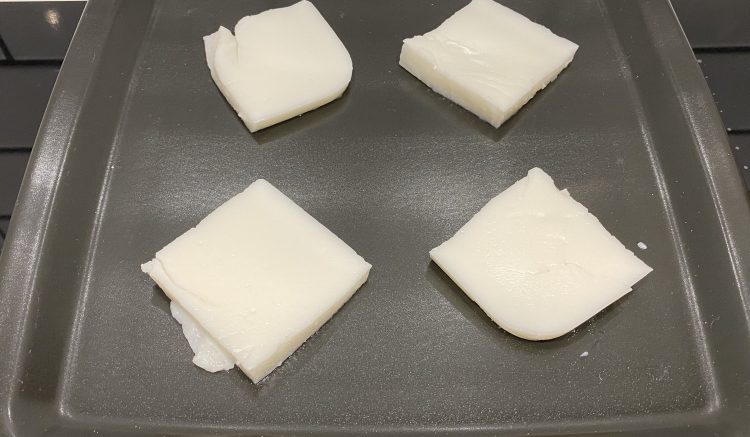 I know Hawaii is not a separate country, but the cuisine is very different from the rest of the USA. This recipe for Haupia was sent to me by my cousin Lyd who lives on Oahu. The original version comes from the website Keeping it Relle, which also has a lot of other great Hawaiian recipes. I made a variation with Stevia instead of sugar to cut down on the carbs.

When I have been to Hawaii, I have had a few variations of haupia. It can be in this simple format, which has the consistency of Jell-O. Alternatively, there is Haupia cake, which has a less dense version of haupia more like cream. There is also haupia pie, which usually has either chocolate or another filling topped by haupia. If you like coconut, then you will probably enjoy all of the versions.

Lightly grease an 8×8 pan with non stick cooking spray and set aside. Or use a silicon pan.

Next, add coconut milk to a saucepan and heat over medium heat until the liquid just starts to bubble. Stir frequently with a whisk.

Then add the cornstarch mixture to the pan and continue to stir. Heat until the mixture starts to thicken and resembles pudding. Remove from heat.

Pour the haupia into the prepared 8×8 pan and allow to cool. Then place pan in the refrigerator until set, about 2 hours or you can leave it overnight.
Cut into squares and enjoy!