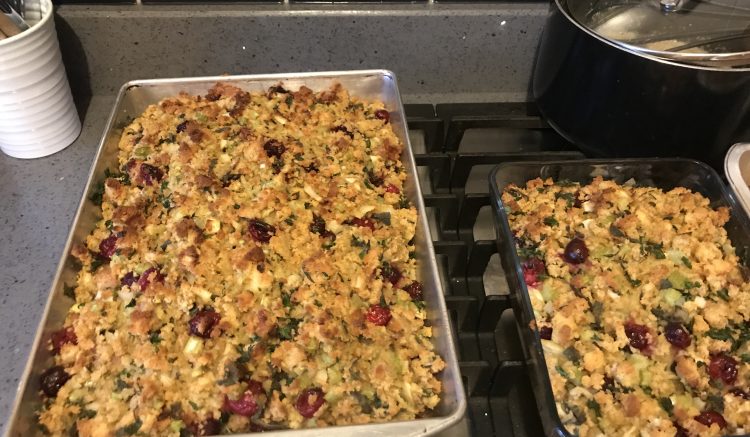 For this recipe, it is important to bake one batch (or a double batch) of cornbread a few days before your dinner. Then break up the cornbread into small pieces and crumbs and dry it out. If you run out of time, you can speed this up by baking the crumbs for a couple of hours at low heat in the oven (100C).

Over the years, this stuffing has remained one of the favourite dishes amongst many of my friends. For vegetarians, you can just leave the bacon out and use vegetable instead of chicken broth. I also tend to leave the pecans out since I use them already in the pecan pie.

As a child, we usually prepared stuffing out of a box and that was also very tasty. In fact, I only started making it myself because the stuffing in England is very different from the US. It is smooth and formed into stuffing balls. If you can find it and don’t have time for this recipe then I recommend Mrs. Cubbison’s. We used to have the cube stuffing with herbs, but the cornbread version is also delicious.

First, put the crumbled and dried cornbread into a large mixing bowl. Next, pour the melted butter evenly over bread mixture, and mix. Then mix bread with all of the other dry ingredients. Finally, add the broth and the salt and stir.

Pour the mixture into a 9×13 baking pan. Bake for about 40 minutes or until brown and crispy on the top. Remove from the oven and serve hot.

Go to US Recipes