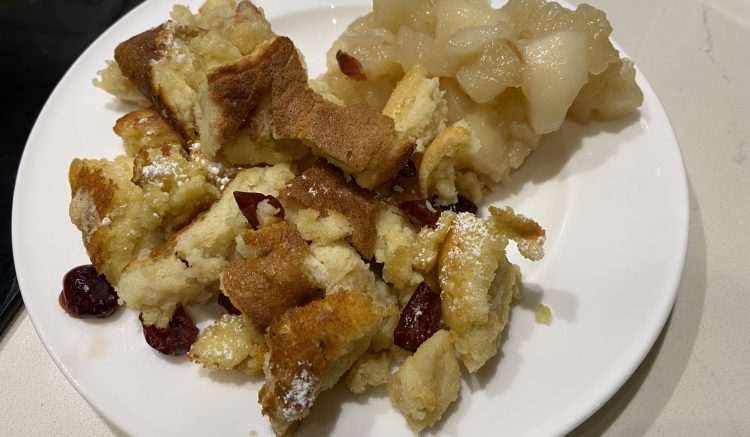 My British friend Christian has been living in Austria for a few years. Therefore, I thought he would be a good person to recommend an Austrian recipe. This recipe for Kaiserschmarrn is an adaption and translation from Gutekueche.at. I would describe Kaiserschmarrn as a giant fluffy pancake cut into pieces and crisped in the oven with rum-soaked raisins.

For this recipe, I substituted the raisins with cranberries because I prefer cranberries. Although rum is optional, I like to add it because it goes well with the other flavours. It also makes the dries raisins or cranberries softer. The Kaiserschmarrn can be served with apple, cherry or other fruit compote. Luckily, I had some fresh apple compote made with apples from my garden. And the applesauce was a nice complement to the dough. If you want to save some to eat later, then I recommend to reheat it in the oven or air fryer to crisp it up before serving.

First, if you are using rum, then start by soaking the raisins in the rum and set aside.

Next, in a large mixing bowl, combine the flour, sugar, salt, egg yolks and milk. Mix well to form a thick dough.

In a separate bowl, beat the egg whites until stiff peaks form. Then fold into the dough mixture.

Add the butter to a large frying pan over medium heat. Let it melt then add the dough. Cook for a at least 5 minutes on one side then flip and cook on the other side until cooked. If you can’t flip it at once, you can cut it in half or into quarters to flip it. I had to cut it into quarters to brown the pancake on both sides.

Remove pan from the oven, and use two forks or the spatula to tear the cooked dough into irregular bite-sized pieces.

Turn the oven off. Add raisins (rum-soaked or not) to the dough pieces and return to the oven for 2 minutes.

Serve with applesauce (or another fruit compote) and sprinkle with icing sugar.