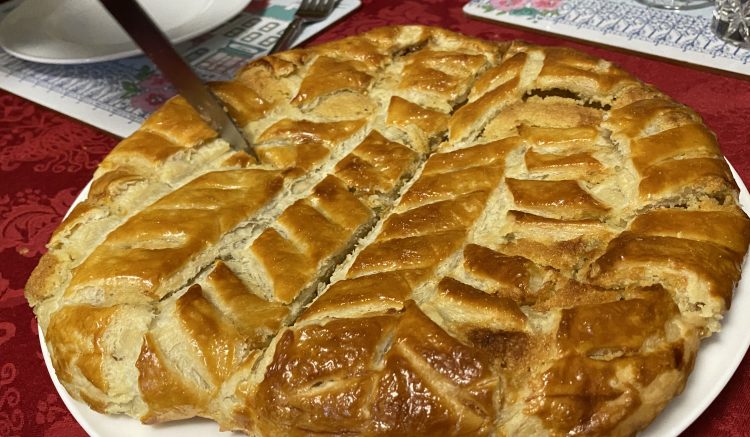 In January, the tradition of the Galette des Rois (or Kings cake) is very popular in France. The recipe for galette des rois consists of a flaky puff pastry (pâte feuilletée) filled with almond frangipane. And hidden inside it is usually a bean (la fève) or more commonly a ceramic figurine. The person who finds la fève is crowned the Queen or King. Almost all of the French patisseries and supermarkets will sell galettes in January. However, in the UK one has to search a little harder, though it is possible to find one. Last year, we decided to make our own rather than trying to find a French bakery in London. We cheated a little bit by using ready-made puff pastry in our recipe for Galette des rois. We made the filling ourselves and added a dried corn kernel inside as la fève.

Two of my favourite bakeries for galette des rois are Pain Pain and Boris Lumé in Paris. Photos below of the professional versions and the crowns.

Preheat the oven to 200C (180C for fan ovens). First, divide the puff pastry in half and roll out each piece into two equal-sized circles with about 25cm diameters. Then, put one circle on a baking sheet and spread with jam.

In a mixing bowl, cream the butter with sugar until light and fluffy. Beat in one egg until combined. Fold in the ground almonds and cognac. Spread the mixture on top of jam. Push the dried corn kernel into the mixture, not too close to the centre. Brush water around the edges of the pastry then put the second circle of dough on top. Pinch the edges to seal.

Note: whoever finds the kernel in their piece of galette is the Queen or King of the day